I recently made up a knitting pattern. It’s a sequence that’s more tricky than it looks, but makes a loose diagonal rib, so the cherry red mohair blend sort of twists and snuggles as I lift it in my hand. I got the ball of yarn from the Yarn Barn, a misnomer (not a barn by any stretch of the imagination, compared to, say, Pet Barn) which happily indicates to me that the owners, who spin their own wools, were far more interested in the aesthetics than the cogency of the chosen title.

It’s the first time I’ve made up a pattern, even though I’ve been knitting since I was young and knitting things for myself from my twenties. My then boyfriend would joke that I was actually a fifty year old in disguise – I liked listening to 3LO, knitting on trams and tending to pot plants. These are still my simple comforts, although it was easier to find time for them when I lived in one room at about sixty bucks a week, the internet was 28bps and I had little to do but essays and a bit of office temping. When I had the children I knitted a pair of rainbow booties out of Japanese wool, and a navy 8-ply cardigan that each of them wore, now stored away.

I like knitting small, intricate things like booties and neckerchiefs and handwarmers, which, using the correct sequence, quickly grow under your fingers into three-dimensional shapes, fitting our awkward limb-ends like, well, gloves. And when I do it, I often imagine the skill of the patternmakers. It leaves me quite spellbound how anyone can imagine how two sticks and a bit of string can be made into complex, three-dimensional, stretching shapes, let alone write them into patterns. How did they work out that knitting thirteen, turning and knitting seven, and turning and knitting twenty six miraculously forms an instep? Or how to knit, hold, pick up and turn a sock heel, or sequence twelve rows in apparently random yarnovers and togetherknits to make lace? Of course, the answer is that this was the domain of generations and generations of women, largely. Very few patternmakers ever get their names printed, but I am sure they know the joy when the tiny cardigan is given, the heartbreak when the socks are shrunk and the tears when a mitten is lost.

Tonight I picked up my needles to continue the piece. It’s only a scarf, and the mohair is unique (the Yarn Barn spin their own yarns) and roughly beautiful. Suddenly I found myself gripped by the desire to do it justice, and doubts came flooding in. What if this pattern is not right? What if I knit for hours, only to find that I don’t like it? What if there is a pattern out there which is perfect, and I ruin this chance? I’m not accomplished enough an artist for this work. I want a warm, red, scarf to wear over my grey coat, but what if this was not beautiful? It was almost as if I wondered if the wool itself would resent me.

I looked through my knitting books and found a lovely lacework pattern. In the picture it was pale pink and knitted around the slender neck of a serene brunette with a flower brooch. I marvelled at the serenity and in my fit of restless perfectionism, started unravelling my scarf.

Unravelling is sometimes called “frogging” in knitting circles, and mohair is particularly tricky to frog, because the long flossy bits tangle together. I ripped several rows, each of them representing ten minutes of my life.

A number of years ago, I did some research work on the “everyday creativity” of women’s craftmaking, and how it contributes to wellbeing. In the literature I read, I came across a pretty settled definition of creativity, that creativity is both the ability to imagine and experiment, as well as the ability to do and to finish. And finishing has never been my strongest suit, largely because of the fear that what I produce will not be good enough. This particular ball took me two years to pick up, look at and roll in my hands before even beginning  to knit with, precisely because it was so lovely.

Sometimes I think about this with writing. I have for many years loved playing with words, sketching poems and images out in notebook after notebook, and now sometimes on a screen. A few years ago I started timidly “finishing” – I performed at a local open mic spoken word night, showed some to family and sent the odd piece to a friend. But the idea of writing publicly was terrifying. So there was much imagining, but little finishing.

At school, I studied and loved English and Literature with the delightfully doddery Mrs Mason. We studied Patrick White, Chekhov, John Fowles and Kenneth Slessor. But the one I fell in love with was William Butler Yeats. Yeats could plumb Greek mythology, and rise with a simple phrase that would catch my heart. I could read Yeats four or five times and find something new at each reading. I never knew much about him (there are mixed views, as for all the modern poets) but a the time I felt like he was someone who was too sensitive for the world, urgently writing to make something beautiful from this life, from political turmoils and the pain of lost loves. Yeats felt less bombastic, less certain, than contemporaries like Eliot and Pound. I still have great admiration for Yeats – where once I wept to The Cloths of Heaven, now I feel shivers reading The Second Coming.

The joy of studying Nobel-prize winning poets comes with a flipside, however, which is that it is completely intimidating. Why would I write and publish anything if it could not be Yeats, or Atwood, or White? Why would I make up my own scarf pattern if someone more accomplished has done better? Hell, why not just buy a scarf?

I’m not sure why we do it. But as I grow older I realise that the things that are most beautiful are more than things - they contain stories, and humans, and humans are not perfect, and are rarely Nobel prize winners. But the fact that my hands have made this might be enough.

I also know that finishing is a form of letting go – letting go of ideals and imaginings and endless edits, of the urge to unravel and start again.

And there’s something about my grandmother’s embroideries on the wall, and the lost lunchbox poems my mum used to write me, and the quilts laid out on my children’s beds. Love, remade, every day. Love of others, but also love of making with the hands, of imagining, and finishing, and accepting. Something finished, to remember we are here, and human.

It was this that stopped me frogging mohair and found me picking up needles, wrapping the yarn around my little finger, counting the pattern, and continuing on. 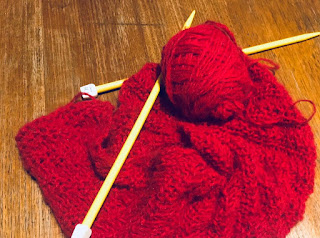 Popular posts from this blog

If you're experiencing distress... 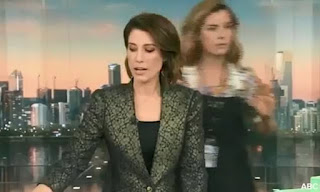 I’m watching ABC News. Again. If you’re experiencing distress, she says, call Lifeline . Barnaby Joyce has just been on. He’s saying “You can make any allegation against a politician and destroy their career. Look at what happened to me.” On Monday, the Minister for Home Affairs weighed in. He said he wasn’t going to bother with “he said/she said” details of rape allegations. If you’re experiencing distress. What about rage? What if I’m experiencing rage, burning in my belly, radiating out through my pores? It’s making me unable to sit still. It’s making me try to post supportive language, to see if anyone else is feeling this. Is it pain? Or is it just pure, unadulterated rage? I know I’m not the only one who can’t sleep this week. For the RAGE. ***** I come from a culture, one of wealth, education, taste and power. My best nod to intersectionality is to acknowledge that for what it is. Our stories get told. Many do not. My contemporaries have power, in Australia, b
Read more 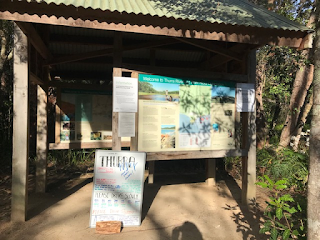 Tonight I found myself crying over a tea towel. I like tea towels. They remind me of grandmothers, tea and mercurochrome. If I purchase any souvenirs on my travels, it will usually be a tea towel. My favourite is from the Lakes Entrance Shell Museum, one of the finest establishments in this state, and the only place I know of which combines an extensive model train set with a large stuffed head of Marlin ( Lakes Entrance: evacuated, still a strong wind change from annihilation). This one is a jingoistic little flannel, printed in sepia tones with a heading in ye olde writing, “Aussie Bush Recipes”. There’s a recipe for “Drover’s Damper” (nobody ever calls it that), Pumpkin Scones, and Anzac Biscuits, as well as a sketch of a “typical bush oven” which looks oddly like a saucepan full of hot coals. And in the top corner, it is printed with the town in which it was purchased: Cann River, Victoria. I bought the tea towel at Easter this year. The kids and I had just emerg
Read more 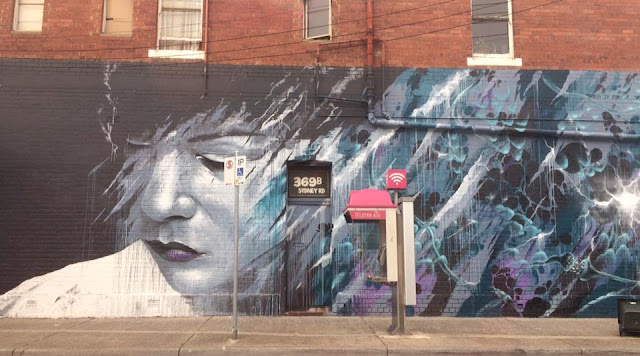 What surprises me every time I go through this is that I didn’t see it coming. There were physical signs. Since Easter I’ve had a feeling in my ribs - a sinking in my sternum and dull pain in the centre that can’t be relieved, or stretched out. It feels like I’m walking around with a boot pressing on my chest. My joints have been hurting, my hips and back, my shoulders, my feet. I was waking up at night, and started catching every bug that came along. There were other signs too: last week I sat down to write a list, and ten minutes later realised I had been sitting motionless at the table, trying to think clearly. I sat down to edit a perfectly good paper that I’d written for work, decided I hated it, tried to fix it, made it more confusing, and then undid all my edits. I’m struggling to dress because I hate everything I own. I wear a lot of black to work right now, not because it represents my mood but because it’s so much easier to only have to choose earrings. Clea
Read more